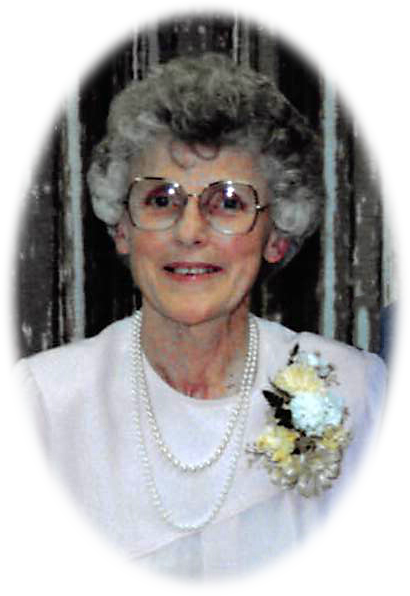 Verna Deloris Johnson was born to Ada (Simard) and Austin Iwen on September 3, 1920 in Bainville, Montana.  She was the eldest of nine children, four brothers and four sisters.  She attended school in Bainville through her Junior year of high school and then transferred to Froid, Montana for her Senior year.

She met her husband Gilman Johnson, when he was working on her parent’s farm near Froid.  The couple married May 3, 1939 and together they raised four children: Korene (Andy) Anderson in Glasgow, Dale (Susan) in Helena, Dallas (Ann) in Bozeman, and Dean (Penny) in Glendive.

Gil and Verna lived in Froid, Montana until 1943 when they moved to Glasgow where Gil worked for the Great Northern Railroad as a brakeman when he was drafted into the Navy in 1944.  Verna and the kids moved to Wolf Point for the duration of the war to live near her parents and to give birth to Dean.  After the War, the family moved back to Glasgow in 1945.

Verna was an exceptionally loving and devoted wife and mother, spending most of her adult life as a homemaker.  In her unassuming way she was an excellent role model and a guiding force in her family.  Besides caring for her husband and children, Verna always planted a large garden and was an expert baker, a skill she learned from her mother, “Ma” Iwen, who was famous for her pies at Iwen’s Hi-Way Market in Wolf Point.

In the fifties and sixties, she was active in the PTA and was a member of the Glasgow Scottie Band Boosters, a group of the band mothers whose primary purpose was to raise money for the band trips and to buy uniforms.  After her youngest son entered high school, Verna worked at the Glasgow Sears store in customer service and later in the accounts department, she was also an active member of the Glasgow Soroptimists Club.

She loved her home and her independence and refused to even consider moving to assisted living or to a nursing home.  She was able to accomplish her wishes only with the devoted assistance of her caretakers: Cindy LaRoche, Mavis Orvis and recently Cecelia Montoya.

Our mom left us with many fond memories of what a wonderful mother she was in all respects.

Burial will be in Highland Cemetery limited to only immediate family due to Covid has already taken place.  Please consider local charities if you plan a memorial donation in her memory. Condolences for the family may be left at bellmortuaryglasgow.com.