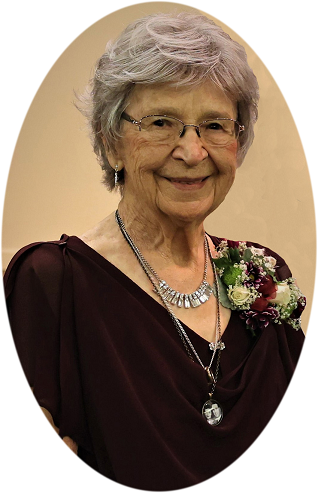 Funeral services for J. Maxine Nicol, age 94, of Prairie Ridge Village who passed away November 19, 2021, at Prairie Ridge was held November 23, 2021 at 10:00 a.m., at Bell Mortuary, with Deacon Ed Malone officiating.  Burial was held at Nashua Cemetery.   Afterwards, a luncheon was served by The Badland Biddies and PDQ’s at the Nashua Senior Center.

Jessie “Maxine” (Turner) Nicol was born August 13, 1927, at Jordan, MT, to Arthur Wain Turner and Spicie Edting (Hix) Turner.  Maxine resided at Prairie Ridge Village in Glasgow, MT for the past seven years.  On November 19, 2021, Maxine peacefully passed away with family at her side, as she went home to be with the Lord and her beloved husband.

Maxine’s folks came from Jordan, Missouri and homesteaded in Jordan, Montana until 1933.  They moved to Wheeler, Montana as Maxine’s Dad began working on the Fort Peck Dam.  After seven years, the family moved to Nashua, Montana where Maxine met the love of her life, George Raymond Nicol, Jr.  They were married December 15, 1945 in the Methodist Church in Glasgow, Montana.  They celebrated 71 years together and were blessed with five children.

Maxine, George, their five children and two granddaughters all graduated from Nashua High School.  Maxine and George were chosen for the honor as Grand Marshal’s for the 2006 Nashua All-School Class Reunion.

In November 1951, Kathy was 2 years old, became ill and was stricken with Polio.  She was flown to Great Falls and kept in isolation for several weeks, staying in the hospital for two months.  Later on, Kathy was sponsored to attend the Shriner’s Children’s Hospital in Spokane, Washington.  Over the next 12 years Kathy was in and out of the Shriner’s, usually during the summer months.

For 56 years, Maxine and George lived on a wheat farm south of Nashua.  Maxine loved life and was a very hard worker who wore many hats as a farmer’s wife.  She learned to drive a TD-14 International IH Cat at harvest time before she even knew how to drive a vehicle, drove tractors and grain trucks, assisted George with mechanic repairs or ran errands for parts; raised chickens, plus milked the cow for fresh family meals; took pride in her huge, beautiful garden to provide for family and friends.  Always busy canning and freezing produce from her garden and fruit from the fruit trucks.  Maxine was an outstanding, creative cook and baker preparing three delicious meals a day for her family.  Her children all remember warm homemade buns, maple bars and cookies awaiting them after school.  Maxine was most famous though, through four generations of family relatives and friends for her Monster Cookies and Candy Cane Cookies.  Every year during the Christmas holidays, Maxine’s generous, compassionate, loving heart enlightened family, friends and those in need by baking Christmas cookies and delivering them.

Maxine’s lovely, sincere smile was known by everyone who knew her.  Her home was welcome to everyone, even strangers.  She always saw the good in people and never had a bad word to say about anyone.  Maxine was witty with a fun sense of humor, always getting one up on her sons-in-law even up to the last few days of her life.

Country western dancing brought joy and happiness to Maxine with her favorite dance partner, her husband.  Just four months shy of age 94, she danced the night away at her daughter’s wedding with that radiant smile she’s known for.

Maxine was a member of the Badland Biddies and honorary member of The PDQ’s (Pat’s Delightful Quilters).  A Memorial has been established to the Shriner’s Children’s Hospital of Spokane, Washington, her favorite charity.

Gathering to see Maxine for the last time, were only immediate family members due to the Covid -19 pandemic and high RSV numbers in Valley County.  A community Memorial Service to celebrate Maxine’s life, will be held in the spring/summer of 2022.

Maxine’s family would like to express their gratitude to the staff at Prairie Ridge Village for the excellent care she received while she was a resident.  They were like an extended family to Mom as well as her family.  We also want to thank Dr. Ross (for being her favorite doctor) and the staff at FMDH for their compassion shown towards Mom and her family during this difficult time.

A few days before passing, Mom was asked what words of wisdom she had to share.  Not missing a beat, Mom said, “Always be kind to others.”