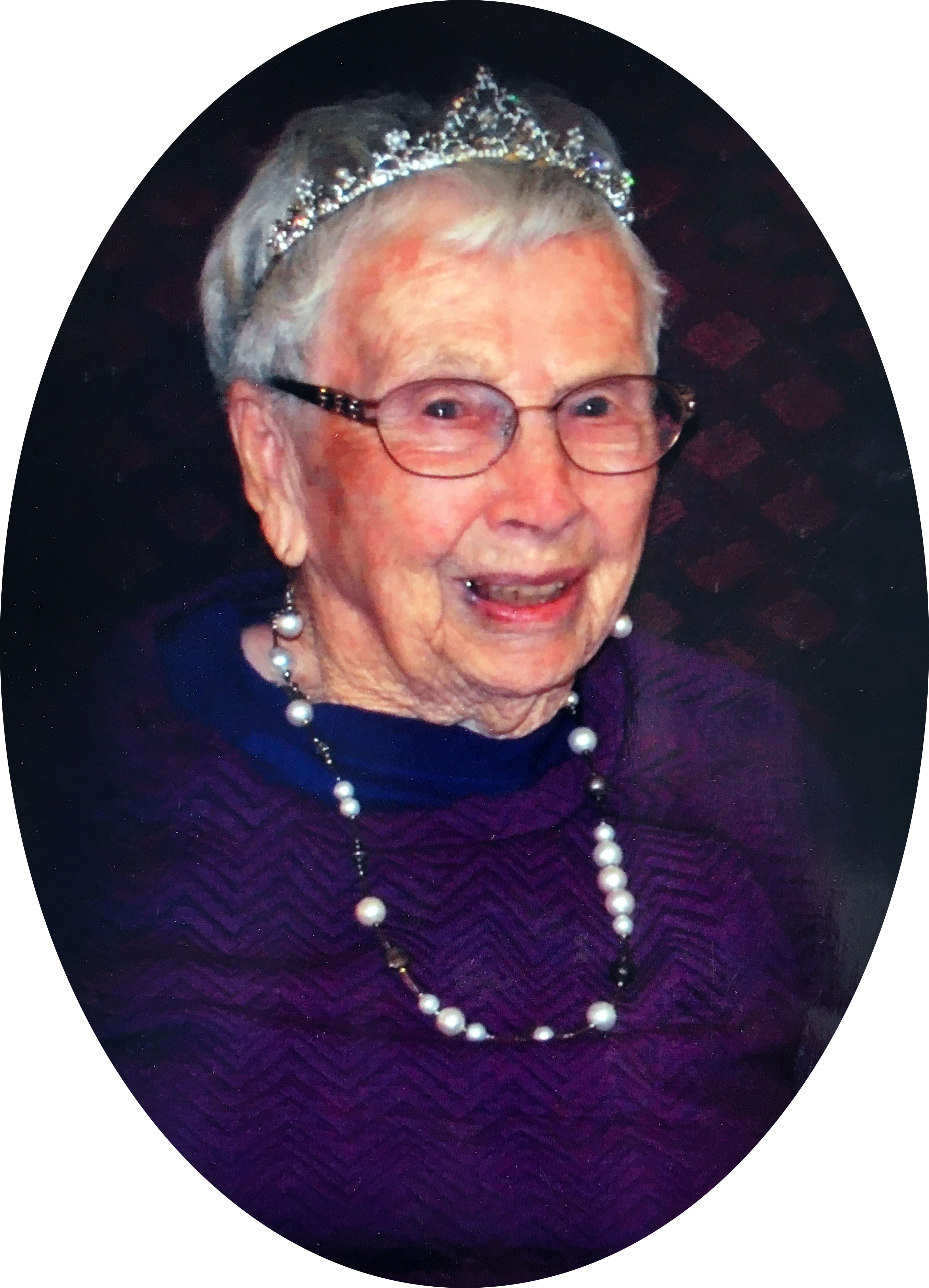 Bernice was born December 4, 1913 in Estevan, Saskatchewan, Canada when her parents G.W. “Willie”and Clara (Berge) Johnson worked there for a local farmer.  The family moved to Montana in 1916 when Bernice was 2 ½, and settled on a Homestead northwest of Frazer where Bernice grew up with older sister Ruth and brother Wallace.

She recalled life on the homestead as hard work for the whole family as well as family fun, with good memories of dances and school programs. She grew up when most health issues were treated with home remedies, although she recalled going to Glasgow when she was a first grader to have her tonsils out.

Bernice and siblings attended the Sjurson School until she was ready to “read for the minister”, when she went to Battle Lake, Minnesota and stayed a few years with her Grandma Rachel Berge and was confirmed in the Lutheran Church.  She returned to Montana and attended high school in Nashua.  She boarded out, working for room and board so she could attend school.  One year she boarded at the home of Oscar and Myrtle Olson, caring for their children and doing housework.  During that time she became acquainted with Myrtle’s brother, Elmer Nybakken, who farmed north of Nashua.

Bernice and Elmer were married in 1932 and she moved to the Nybakken homestead.  As a farm wife, she raised turkeys, chickens and a large garden plus milked cows and would help with field work when needed.  She and Elmer had two children, Wayne born in 1933 and Shirley in 1936.  They were good hosts and had a wide circle of friends and relatives who often came to visit, play cards and enjoy a meal.  Bernice was a good cook and holiday meals included many Scandinavian treats, such as lefse, krumkake, and futigman.  When the kids were ready for school they purchased a place on the outskirts of Nashua so they could move the cows and family to town for the winter months.   They followed the sports teams and music groups of the Nashua High School, often taking a car full of kids to tournaments and festivals, etc.

They were active in the community especially the Lutheran Church, Farmers Union and the local Co-ops where she was often in charge of meals for meetings.  They liked to fish, and were instrumental in bringing the Marina to the Fort Peck Lake.   After the kids were grown, Bernice and Elmer traveled by car or motor home throughout the United States, visiting friends, their many god-children and relatives with Bernice doing a lot of the driving.  In 1954 she became a Grandmother for the first time and thoroughly enjoyed that role – for the rest of her life to include the great and great great grandchildren

Elmer passed away in 1975.  Bernice continued to live at Nashua with son Wayne, and traveled with sister Ruth Brooks, also a widow.  They spent winters in Arizona.  They also went to Panama, Switzerland, Holland and Norway.  In Norway, she purchased a hardanger kit, and soon learned to make the beautiful hardandger doilies and decorations.  All her grandchildren and great grandchildren received special pieces.   She made hardanger alter clothes for Our Redeemer and Grace Churches and won Best of Fair for a hardanger doll.  She continued to do hardanger until she was past 100 and it became hard to see and count the stitches.

Her travels took her on a tour to Hawaii in 1978, where she met Harry Herman, from Plentywood, who was also with the tour group.  They were married that fall and she and Harry went to Arizona the next winter, where they purchased a home and spent the winter for many years with Ruth next door.  They danced and played Bingo and entertained and so enjoyed their time.   Harry passed away in 1985.  Bernice continued to spend winters in AZ and summer in Montana until 2010 when she gave up her beautiful winter home and moved to Prairie Ridge.  She lived there until July, 2020 when she moved to Valley View.

Her memory was sharp – she could recall things like the price they paid for a new car in the 1940’s, the year when there was a good or poor crop, a birth or major storm.  She was a story teller and the family has tapes of her memories.  She enjoyed going to the casinos, playing cards and games, still playing hand and foot in 2019 –Bingo was a long time favorite pass time and she was often a winner.

Cremation has taken place, and services will be held Saturday, September 26, 2020 at 10:30 at Our Redeemer Lutheran in Nashua.  Condolences may be left at bellmortuarymontana.com for the family.