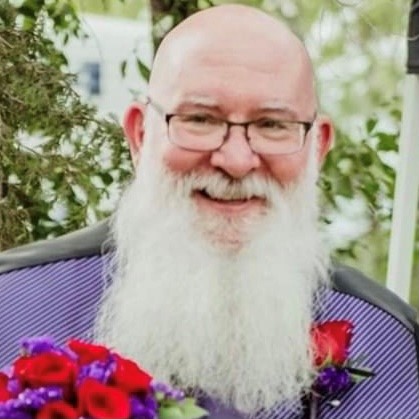 Robert James Frueh “Jim” passed away unexpectedly on November 26, 2020, in Glasgow, MT. Jim was born on January 21, 1969, in Libby, Montana. At age 4½ , he was adopted into the family of Ed and Marci Frueh. Jim became the eldest of six adopted children, Bobbi Jean, Tony, Ann, Beth and Byron.

Jim grew up in Glasgow and graduated from GHS as a proud Scottie in 1987. One of his most memorable and prized achievements was being on the starting line-up as a linebacker for the Scotties 1986 Class A Football State Champion team. After high school, Jim attended college at MSU Northern in Havre, MT, where he obtained an Associate’s Degree in Business. After college, Jim was offered and accepted a management position at Foot Locker Inc. in Mount Vernon, WA. It was here that Jim and his former wife, Monique Cochran, had their two daughters, Ashley and Jasmine Frueh. In 1993, Jim returned to his hometown of Glasgow where he started his career at Stormer Hobbies. Jim enjoyed working with Bob and Lori and very quickly became part of a close-knit work family. Jim retired from Stormer Hobbies in 2019.

In 2014, Jim worked with his sister Ann, to build, open and establish The Loaded Toad coffee shop. It was here that Jim would venture into his new-found career and meet the love of his life, Alicia. In 2019, Jim and Alicia were married and together purchased The Loaded Toad coffee shop. They waited to celebrate their love for each other until this past summer where they were re-married in the back yard of their new home. He loved working at The Loaded Toad, in part because he enjoyed so much being a part of the Glasgow downtown community and seeing familiar faces every day. He was an integral member of the “Toad Tribe” and his friendly wit will be missed by many.

Jim was a sports fanatic and loved recording statistics. His favorite team was the New Orleans Saints. One of his fondest memories was being able to travel to New Orleans where he watched the Saints play live. Jim was an outstanding and talented chef. He made his own proprietary sauces and spices, and even tried his hand at making his own limoncello. He loved cooking and sharing his incredible recipes and food with his family and friends. Many great times were had around his table and back yard, eating, drinking, and sharing stories. Jim was known by all for his “magnificent” white beard, which he spent many hours grooming for the ladies to drool over.

Jim is survived by his wife Alicia; daughters, Ashely Frueh of Bellingham, WA, and Jasmine Frueh-Johnson (Brett) of Glasgow, MT; his grandchildren, Dustin, Blakely, Style, Ivy, and Mollie (on the way); his siblings, Bobbi Jean Kirby (Mike), Tony Frueh (Dusty), Ann Kulczyk (John), Beth Jeide; Byron Frueh (Robyn); his life-long best friend, Tammy Dunn; his mother-in-law, Laurie Doke (Neil Chouinard), sister-in-law, Tanya Tweten (Benjy), and brother-in-law, Travis Doke (Jessica); his godchildren/nephews, Harley and Vaughn; his nephews and nieces, Michael, Kevin, Ryan, Kendra, Taryn, Lance, Abbey, Reghan, Kale, Carter, Nikolas, Saylor, Ellie, and Trystan; and many special friends in his life including Sharon Retterath and his “Toad Tribe”. He was predeceased in death by his parents, Ed and Marci Frueh, and his father-in-law Floyd “Shorty” Doke. Jim was a loving husband, father, brother, grandfather, uncle, and friend who will be missed by all who knew him.

Cremation has taken place and a celebration of Jim’s life will be held in the summer of 2021 at a date to be determined.