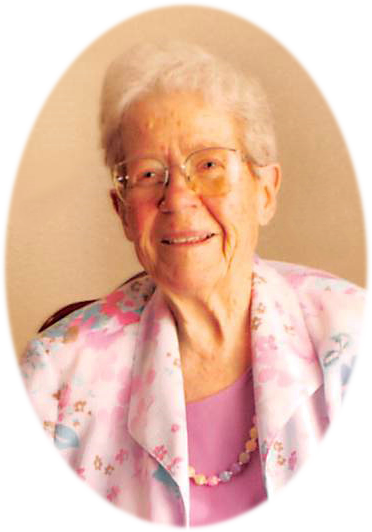 Gladys May (Pearson) Hansen died at Valley View Home in Glasgow, Montana, on Tuesday, September 22, 2020 — just one day short of her 99th birthday.

She was born to Martha and Axel Pearson at their farm in the Avondale community, 18 miles south of Richland, Montana, on September 23, 1921. Gladys was three years younger than her brother, Arnold.

In Gladys’s written memories she remarked that the farmhouse, 12’ x 18’ with a lean-to added on when Gladys was born, was not tight.  During the “dirty 30’s”, wind would make the linoleum billow up “like walking on a hard air cushion.” When the wind blew from the west in the summer, her mother made them wear wet hankies over their nose and mouth, then scoop up the sand under the windows with a dustpan when the wind died down.

Gladys attended Sunnyside School, 2¾ miles away, with 34 students in eight grades and one teacher.  The teacher pushed her through three years of school in two years.  Arnold would drive them to school in her dad’s Model T Ford.  In winter, her dad would take them with the horse and sleigh, covered up with horse-hide blankets in storms, or in milder weather often holding on to ropes and getting pulled behind on skis or sleds.  After Arnold started high school in Opheim, Gladys often walked to school.

For high school she stayed in the girls’ dorm in Opheim.  She missed her graduation in 1938 because she was home with pneumonia.  Mom recalled her neighbor and life long friend Alden Smith told that she “took him down and beat on him because he was teasing me and I said, ‘I don’t have red hair for nothing!’”

Gladys didn’t know what she wanted to do, but her mother thought she should be a nurse, so that’s what she did.  She had to wait a year until she was 18 to enroll at Great Falls Deaconess School of Nursing.  Training was exactly 36 months to the day.  Then she took a job at Missoula Northern Hospital.

It was on the train back to Missoula after attending her parents’ Silver Anniversary in October 1942 that Gladys met Carl Hansen.  Carl enlisted in the Infantry in December, and they corresponded.  In January 1943 Gladys enlisted in the Army Air Force Nurse Corps and was sent to Gowan Field at Boise, Idaho.  She remembered, “Sirens would go off when there was a plane crash, and we all had to go running to our stations.  I wanted to run the other way because there were so many plane crashes, so many dead or badly injured men.”

Carl and Gladys married in 1946, living the remainder of their lives in Glasgow.  Gladys worked at Francis Mahon Deaconess Hospital for nearly 40 years, retiring in 1983.  Most of her nursing was working nights on the OB floor.  Often over the years people would remark that Gladys was their nurse when they had their babies, or she was their mother’s nurse when they were born.

Gladys and Carl enjoyed square dancing for many years, travelling to many international dances. They had a sign business in their home for many years; some of the signs are still in use around Glasgow.  In 1974 they ordered a Capp Home and did most of the inside finishing themselves.  After retiring they both did volunteer office work at First Lutheran.  Gladys and the church ladies sewed quilts galore.  Embroidery and reading were favorite pastimes until her eyes failed.

They moved into assisted living at Prairie Ridge in 2007. Carl passed in 2009.  Gladys entered Valley View Nursing Home in 2017.

Cremation has taken place, and a memorial service will be held Saturday, October 3, at 1:00 p.m. at First Lutheran Church in Glasgow, Montana, with military honors to follow.  Condolences may be left for the family at bellmortuarymontana.com